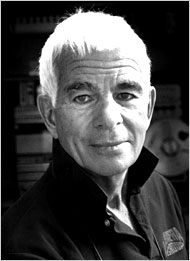 Kirk Browning, whose unusual career path took him from chicken farmer to television director of “Live From Lincoln Center,” died on Sunday in Manhattan. He was 86.

“Kirk contained the entire history of cultural television in our country,” Mr. Goberman said on Monday. “He started in 1948 with the NBC Symphony, and here he was at 86, still turning out fabulous performance television.” …

In addition to his “Live From Lincoln Center” programs, 10 of which won Emmy Awards, Mr. Browning eventually directed, among other productions the premiere of the first opera written expressly for television, Gian Carlo Menotti’s “Amahl and the Night Visitors” (1951); the first TV show with Frank Sinatra as host (1957); and “Hallmark Hall of Fame” music and drama specials (1951 to 1958).

For PBS he also directed many “Great Performances” and “Live From the Met” programs; “Pavarotti in Concert at Madison Square Garden”; and telecasts of numerous Broadway productions. He won two outstanding individual achievement Emmys for PBS programs: one in 1987 for “Goya With Plácido Domingo,” and one in 1988 for “Turandot” from the Met.