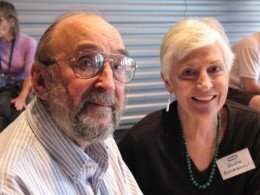 He always insisted he was not a chef, even though he had a TV show on Italian food, had written many cookbooks, and had run three restaurants. I’m just a cook, he would say. Whatever he called himself, I definitely preferred shopping at the supermarket with him to going by myself, with the risk that I might bring home the wrong things.

“It’s not artichoke season,” Franco would say. “Artichoke season is in March. Just look at those things, we’re not buying them. Overpriced, too.”

He could tell just by looking at the artichokes that they were not going to taste good. They will be tough, he’d say; you’d have to cut away all those outer leaves and there will be nothing left.

Now in the market I look at the big fat artichokes and wonder what he would say about them. They look good, but it isn’t March. I pass them by. I’m not going to cook artichokes anyway if he isn’t here to eat them with me. If I get the Brussels sprouts, I’ll feel better, because he hated Brussels sprouts, and he’d be happy if he wasn’t here and I was eating them all by myself. He won’t be around for dinner tonight, so he won’t complain about the awful smell they make while cooking.

I arrive at the seafood counter and think about all the things I will never cook again because he isn’t here to share them with me. Why would I make that fabulous mussel recipe of his, then when I eat them, just sit at the table and think of him all the time? All that trouble and he not here to eat with me?

I keep two place mats across from each other on the dining room table. That way I can pretend he is still here and we might even have a conversation.

The truth is that as Franco and I got older, we would often put the two place mats next to each other and sit side by side, savoring his spaghetti with Bolognese sauce while watching a movie on TV. And we’d laugh remembering how neither of us had allowed our children to watch TV while having dinner. We vowed never to tell them, and we never did, so I can only hope none of them reads this article. Now by myself, I almost always watch a movie, usually eating an already prepared piece of chicken from the market, or just a salad. I don’t feel like cooking anything, because there is no one here to eat with me.

Dear friends invite me out for dinner at the restaurant the four of us used to go to together. I try not to look at the empty chair next to mine. I gaze around the room and see that just about everybody else is a couple. When they are eating dinner at home, there are two of them and they talk to each other, or maybe they, too, watch a movie.

I was at the butcher counter in the supermarket the other day and asked the clerk if she would please cut one of the pieces of steak in half. She refused, saying it was store policy that every piece of meat must be purchased as displayed in the case. Clearly, everyone is expected to eat with someone else. The thought left me in tears all the way home.

When Franco began to get sick, we got cellphones because I felt it was necessary for us to be in contact with each other. I wanted to stay in touch even if I went only as far as the supermarket. I’d call him, describe the zucchini in the bin, and ask if they were acceptable.

“It sounds as if they are too big,” he’d reply. “Only buy the small ones.”

“What about peaches? They’re having a sale.”

When will I start to cook again, I ask myself?

I still remember well that cold winter evening when Franco, bottle of wine in hand, appeared on my doorstep for our first date. I had the courage to cook for him – my pasta with zucchini and cream sauce, a recipe I learned while living in Italy and which I thought of as my signature dish. He peered over my shoulder the whole time, inspecting every move I made. I expected to hear a critique of my cooking ability, but instead he declared it to be “molto buono.”

I miss him at the table. Surely we are not meant to eat alone.