Vice President for Branding and Visual Design Chris Pullman retired in October 2008, after 35 years of skillfully defining and shaping the visual persona of WGBH across an expanding array of media platforms. 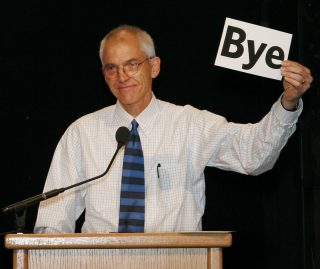 The chance invitation to work here at WGBH placed me in an environment that was a perfect fit for my temperament and aspirations as a professional and as just a plain person. Once here, I recognized, gradually, why it felt so right as a place to work and associate. I’d like to take this opportunity to share:

10 lessons I learned (or at least had confirmed) at WGBH

1. Work on things that matter

If you possibly can, use you skills and your time to make a difference.

Long before I came here I had developed a preference for non-profit projects. In my free lance work and in my years at the office of George Nelson, the projects that interested me most were the ones for non-profit, pro-social clients.

By the time the opportunity to work here, I had already made the decision that I wanted to work someplace that made a positive difference for people, and that affected a lot of people, not some boutique studio doing design for other designers.

Frankly, when the phone rang and it was Ivan Chermayeff saying that there was an opportunity to work at a TV station in Boston, my first reaction was “definitely not.” This was because my teachers and mentors at Yale had made it clear that the only way to squander a good education faster than going into advertising, was to go into television.

But I was vaguely curious to see what a TV studio was like, so after a while Esther and I decided to just go up and scope the place out. After about 20 minutes with the then General Manager, Michael Rice, it became clear to me that what WGBH was up to was very different from what television in general was up to. So I said “yes,” and have found myself for the past 35 years in the ideal environment to do the kind of work I had hoped to do.

In this first lesson I may be preaching to the choir, since here we all are. But I think it is particularly pertinent for the younger people at ‘GBH for whom this may be a first way-station on a longer professional journey. Given all the ways you could use your skills and your valuable time, pick something that serves the greater good.

Birds of a feather flock together. That is a natural thing. Most of the people here are here (or certainly stay here) because of our mission. Certainly, my long tenure has been largely because of the people in this room, who together and individually have shared with me such personal and heart-warming recollections of our time together.

Since April, when I first announced my intentions to leave WGBH, the private expression of these feelings has been so gratifying, both personally and professionally, that I recently suggested to Jon and Henry that maybe we should institute the policy of encouraging individuals to make periodic “mock retirement” announcements, with the goal of releasing more regularly the flow of kind remarks for the nourishment of the individual, since we are otherwise so reticent to praise or encourage others in our busy, self centered daily lives.

Which leads me to:

And be positive. And be respectful of the work of others. Strive to understand each others professional contributions and then respect them (as you would want them to respect you) with your actions and your comments. Remember: we are all applying our own particular skills towards a shared objective.

High standards are something that has set this place apart. Even in hard times, it is important to keep hold of this core distinction

Don’t settle for “whatever.” The corrosive Dilbert mind-set is depressing and demeaning. Don’t give it a foothold here. I prefer the “see you and raise you one” escalation of good ideas, even crazy ideas.

High standards is something that has set this place apart. Even in hard times, it is important to keep hold of this core distinction, whatever it costs.

5. Have a sense of humor

Humor is the grease of communications. Wit not only engages your head, it engages the other guy’s. Be serious, but don’t take yourself too seriously. As an institution, don’t loose sight of the potential to use sly humor to make connections and put people at their ease.

6. Design is not the narrow application of formal skills, it is a way of thinking

I knew this before I came here, but my time here has reinforced this idea.

My position, first established in 1973, and unusually high up in the org chart, allowed me (and I should say: expected me) to attend to all aspects of the way this organization expressed itself.

My job, and that of scores of designers I have worked with in my area, has been to help define and then express through our work, a consistent, honest and engaging persona for WGBH. (Today’s name for this, by the way, is branding, but it is a process as old as the profession.)

This role has led me into a weird soup of assignments, many of which you have seen here today:

Each of these projects was a puzzle to figure out within the constraints of budgets and timelines, and with respect for the unique context of that particular problem. Whether it was how to draw a dog with low self-esteem or how to convince a company to underwrite a project, all of it was design to me.

Ultimately this led to the biggest project of all: the design and construction of this new building. It was an honor and an incredible 5-year high to work on this project. It threw me into intense relationships: with our architects, who understood our mission and our culture and came up with a building that works for us; with our trustees, whose guidance and enthusiasm was so helpful; and with my partner-in-crime, Dave Norton, whose contribution to this project on so many levels has earned my greatest respect. This was the project that for the first time gave us an opportunity to apply the same high standards we insist on for our programming to the physical environment in which we all work and in which we welcome the public.

The practice of design — dare I call it “intelligent design”?? — has helped WGBH achieve a distinction among broadcasters and public media publishers. It is my hope that he next person to hold this responsi- bility for the foundation will have as much fun and have as expansive a mandate as I have had.

7. Variety is the spice of life

When I came here in the early 70’ s the trend was toward monolithic design programs governed by a thick and sacred style manual.

As I got to understand the business, this strategy seemed to me to make no sense for WGBH. With programming as diverse as The French Chef, NOVA and ZOOM, no one mode of visual expression could logically suite this range of content. It occurred to me that in fact variety itself can be a kind of consistency.

But when the visual expressions of a company are always and rightfully different, you have to have some other constant that binds the work together, something that lets individual expressions be different, but makes them recognizable as a family of related materials. The goal in this game is to strive for the smallest number of constants and the largest number of variables. And you have to turn to non-visual sources of consistency.

So, soon after I got here, I proposed to Doug and the rest of the designers that we adopt a set of non-visual criteria to define “good design.” Without resorting to the normal formal jargon, if you and your client could answer “yes” to the following questions then it probably is a good piece of design.

“Of the highest quality” does not mean expensive. It means thoughtful and well-executed in its genre.

A final measure, and perhaps the key measure in a business where variety is the norm, is quality. “Of the highest quality” does not mean expensive. It means thoughtful and well-executed in its genre. If all these things are present in a project, then it is likely to be successful, from a design point of view, and otherwise.

In fact it is impossible to NOT have an institutional character or image. It is the sum total of a person’s experience of our staff, our physical plant, our programming and services, our communications — everything we say and do. Every person out there experiences a different assortment of these expressions, but they average out to define our institutional character or persona.

This character cannot be contrived. If it is contrived it will only fool people for a little while. Like a person you know who says he is one thing but whose daily behavior suggests another.

But a person’s character inevitably shifts as they mature. The same thing happens to companies like ours. Over the years I have observed that our own institutional character has shifted as our own self-image has shifted.

Each of these shifts in self-perception, required a slight shift in expression for our work, ideally without changing the underlying DNA of the place. We are now approaching the end of this decade. What will our self-perception be in 2010? How will we express it? How can we respond to these natural and gradual shifts while still maintaining our core character, a character that people, both locally and nationally, know and respect (and willingly support)?

9. We’re all in the “understanding business”

No matter what we call ourselves, what we all do here is ultimately about helping people understand the world and their own life.

This term was first coined by the architect Richard Saul Wurman to define the design profession but it strikes me that, no matter what we call ourselves, what we all do here is ultimately about helping people understand the world and their own life.

This is the idea that our mission statement (now part of our building so it will be harder to change!) reflects, and is at the heart of our institutional character. And it is what has attracted me to this work all this time.

We are all the result of a lifetime of experiences, some good, some not so good. My 32 years of experiences before I came here prepared me to be useful to a place like this. My 35 years here have enriched me and allowed me to grow in ways I never would have imagined. Now I’m going to see how that diet has prepared me for my next life. I will miss you all.