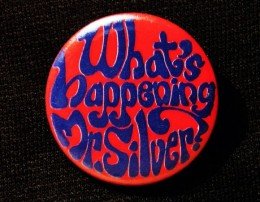 I always looked forward to hanging with Bud Collins. He genuinely liked our show, “What’s Happening Mr. Silver?” and told me so. Bud’s passion, his camaraderie, his warmth and wit were irresistible to me, and I was ecstatic that he enjoyed what we were doing.

Obviously, I savored spending any time with him. One day he called me and told me that his guest in the upcoming taping was Muhammed Ali. This in itself was exciting to me, and everybody else. But the cream in the coffee for me was that Bud asked me if I’d like to meet the amazing champion. After the taping, I went on to the studio floor and Bud introduced me to Ali. I distinctly remember the size of the legend’s hand, when we shook hands. It utterly enveloped mine and yet somehow expressed goodwill to me in its firmness and enthusiasm.

We talked for about twenty minutes, and it was quite clear to me how much respect and liking Ali had for Bud. Who didn’t, truthfully? Bud’s effervescent energy is unique and very pleasing to be around.

Another example for me of the great “casting” taste of the station was the bright crew of TV personalities, from Bud to Julia Child, all having enough brio and TV feel to change the quality of how to be on television.

Julia often did her show in Studio B when we were doing “What’s Happening Mr. Silver?” in Studio A. One of my fondest (and most delicious) memories is of eating leftovers from her show along with our two studio crews.

Question: What could be more wonderful than that? The answer: Well, it’s having dinner cooked by her at the Child house and eating with Julia and Paul, her gentle, witty, knowledgeable husband, not only dining on the obviously supremely tasty food, but hearing from the two of them a series of juicy, hysterical anecdotes about their learning curve on French cooking early in their marriage.

Conspiracy/televisual anarchy without anger or agenda. That was basically the underlying urge in the work we did on “What’s Happening Mr. Silver?” way back in 1967 and 1968. Fred Barzyk’s vision was never static, never ideological, never even self-consciously artistic. He consistently utilized and manifested his muscular mischievous side as a way of creating TV. This irreverence was effortlessly coupled with a remarkably liberated intellectual and visceral vision of what TV could be.

Everyone working on our show thoroughly enjoyed production meetings, shoots, and post. Fred fused a little Ernie Kovacs into a Boston-imaged Fellini-esque caricature and then threw in the already ongoing madcap everyday gestalt of the later sixties and voila – you had television without the usual and sometimes tedious cadences of both spoken word and visual presentation.

I remember with glee the repeated trick of shooting the live show on a Thursday night, usually with me more or less alone in the studio, while multiple film chains, often controlled by the brilliant mind of David Atwood, sort of spluttered into the ongoing show, be that an interview or a monologue or a purely visual piece of madness.

The mix of absurdist stock footage and locally-captured 16mm weirdness never allowed the show, or the staff, to settle. So I never knew what was about to happen, which made for an attack on the clichés of broadcast television. It didn’t always work, but it pushed the media envelope, when almost all the other envelopes were being relentlessly pushed by the wild spirit of those days – in politics, music, civil rights, protest, movies, fashion, culture, design, etc.

Fred and Olivia Tappan and David Atwood et. al. dropped the conventional wisdom plan of attack, as it were, and came up with a very potent, if eccentric, TV display of total spontaneity, in a sixties zeitgeist, and did it trusting all the participants to be somehow revolutionary and, simply put, different.

The two 16mm cameramen on our show were Peter Hoving and Boyd Estus. How magically fortuitous was that? It was a constant source of humor and skill, in entirely different ways, from both of them. It simply made their film inserts in the show an art form all unto itself.

I was always magnetized during filming (occasionally in obscenely early morning hours) because of the wonderfully lethal mix of Fred’s endless creativity and their usually spontaneous expansion upon that. And I was amazed that we always had access to these two highly dexterous professionals working a couple of times a week usually on a myriad of remote films for us.

They had completely different personalities and attitudes towards the art of Arriflex/Éclair/Aaton shooting: Boyd, the consummately calm camera operator, quietly taking in every detail of a scene (whether it was a head shop in Cambridge or a political be-in on the Common) while, in marked contrast, Peter Hoving hovering intensely over all he surveyed, guiding his lens rapidly to the expected shots that we basically needed for any given show, and also to the unexpected and explosive.

These days, all is video it seems, but I maintain that the texture and visual resonance of 16mm film added a very special feel to the show we did, where the audience was triggered by the film segments to sense yet another dimension to the Barzykian vision. But even more than that, I have to say, the sheer fun of working with these two totally WGBH-level-of-excellence operators was a once-in-a-career gift to me as well as a consistent delight for our viewers.

Thalassa Cruso was my English pal and compatriot at WGBH. Her gardening show “Making Things Grow” was almost a sister show of Julia’s. Thalassa was equally idiosyncratic, yet, just like Mrs. Child, was a clear and no-BS articulator/teacher.

Thalassa could be quite pugnacious, always audacious and horticulturally very sagacious! Maggie was married to the late, lamented MIT scion, Jerome Lettvin (also a terrific guest on “What’s Happening Mr. Silver?”) Her verve and brio and knowledge was a joy to watch and she was and is a joy to be around.

We once did a “What’s Happening Mr. Silver?” show when we invited soldiers (who were still in uniform and had been in Vietnam) to a Studio A party where the other invitees were draft resisters and antiwar activists.

Fred had the studio decorated with military objects – guns, swords, footlockers, medals, and I was frankly kind of anxious that when these two diametrically opposing groups came together, a mini-war might ensue!

Well, we lubricated everyone with beer and spirits and before long, a remarkable confluence occurred, rather easily. Everyone started talking together, and there was a completely counter-intuitive thing happening. Everyone got along famously. There were disagreements obviously, given the roles of the men in the studio, but there was almost no anger.

I wafted around chatting ad lib with everyone, and I remember vividly the good vibes generated and a subtle truth emerging quietly. Civility prevailed, cordiality grew and even though there was the crucial element of the demon alcohol in the mix, it was a truly lovely evening.

Unfortunately, this show was wiped. Two-inch high band videotape was very expensive and it didn’t even seem weird at the tine that this show amongst quite a few others from the series had to go bye-bye. After all, NBC wiped many tapes of Johnny Carson’s Tonight Show, so who am I to complain?