Skip to content
Multimedia > Video
This entry is part 20 of 24 in the series The Fred Barzyk Collection
Reading Time: 8 minutes

This is the fourth in a series of reminiscences by Fred Barzyk, longtime WGBH producer and director. Watch the entire video, Between Time and Timbuktu, below. 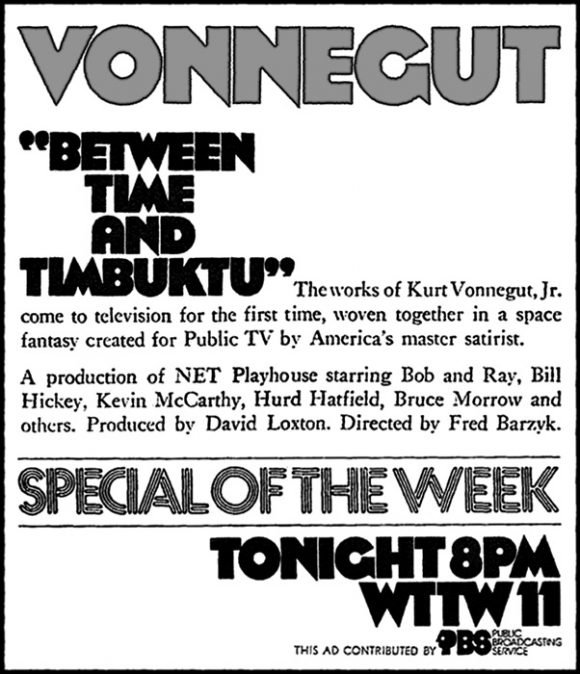 “Between Time and Timbuktu or Prometheus-5: A Space Fantasy by Kurt Vonnegut, Jr.” was an idea hatched by David Loxton who was working for NET Playhouse, led by Jac Venza. This is how the 1974 TV show happened.

I had just produced my third local drama for WGBH called “The Pit.” This time, WGBH gave me a budget to cover the costs of the production, unlike the earlier two: ”Five Days” and ”2 for Laughs.” It was a crazy play about a little old guy who tried to save a little girl who had fallen into a large pit. Of course, the old guy can’t get her out and is misunderstood by everyone. He is accused of all kinds of things, including a Senator declaring him to be un-American. Eventually, the police carry his limp body off the set. The girl never did get out of the Pit.

David predicted the scene Kurt would love is when the old man is seated on the pit trying to convince himself that things could be worse. He starts naming off all the diseases that one could get. It goes on and on, on and on, getting funnier and funnier. David was absolutely sure Vonnegut would get the humor and let us produce a drama with him.

Vonnegut lived in Western Mass, an hour drive to WGBH. Jac Venza and WGBH invited him to WGBH studios to view “The Pit” and talk to him about doing a drama for NET Playhouse. He thought the scene was funny and amazingly agreed to let us take all of his works, put them into a blender, and come up with something new. I was speechless. 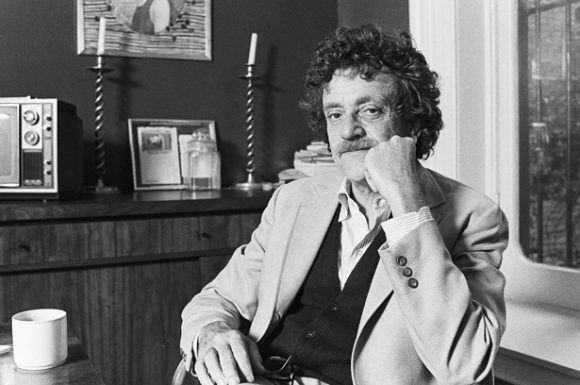 Kurt was commissioned to be an advisor on and contributor to the script. David O’Dell did the first draft of the script. Everyone then added their contributions. Kurt looked for an idea that would create an over-arching plot line. He was amused by America’s endless fascination with space travel. He proposed that a poet had entered a jingle contest and won a space trip to the “Chrono-Synclastic Infundibulium.” He insisted that the actor playing Stoney Stevenson had to be William Hickey.

Kurt had first met Bill Hickey at the filming of his novel “Slaughter House-Five.”

Slaughterhouse-Five is a 1972 anti-war/sci fi film based on Kurt Vonnegut’s novel of the same name about a writer who tells a story in random order of how he was a soldier in WW2 and was abducted by aliens. The screenplay is by Stephen Geller and the film was directed by George Roy Hill. It stars Michael Sacks, Ron Leibman, and Valerie Perrine, and features Eugene Roche, Sharon Gans, Holly Near, and Perry King. The scenes set in Dresden were filmed in Prague. The other scenes were filmed in Minnesota.

Vonnegut wrote about the film soon after its release, in his preface to Between Time and Timbuktu:

“I love George Roy Hill and Universal Pictures, who made a flawless translation of my novel Slaughterhouse-Five to the silver screen … I drool and cackle every time I watch that film, because it is so harmonious with what I felt when I wrote the book.” 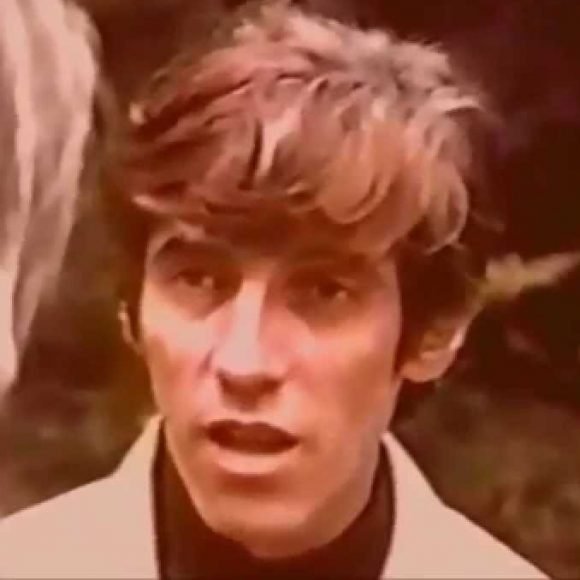 Hickey had a small role in Slaughterhouse-Five. One day Bill Hickey invited Kurt to his trailer. Kurt was dumbfounded that his trailer had no chairs or tables, just an empty hull. When he asked why Hickey didn’t have chairs or tables, Bill said he didn’t want to bother anyone. He had lived this way for 2 weeks, just sitting on the floor. Vonnegut loved this guy. And we did too.

This was an NET production (they funded most of the production) co-produced with WGBH (who paid for the rest) Most of this was shot in Boston by cinematographer Boyd Estus. Here is what Wikipedia has to say.

Between Time and Timbuktu is a television film directed by Fred Barzyk and based on a number of works by Kurt Vonnegut. Produced by National Educational Television and WGBH-TV in Boston, Massachusetts, it was telecast March 13, 1972 as a NET Playhouse special. The television script was also published in 1972, illustrated with photographs by Jill Krementz and stills from the television production.

The script was primarily written by David Odell, with contributions from Bob Elliott and Ray Goulding, and the film’s director. Vonnegut himself served as an “advisor and contributor to the script.”

Bob and Ray was an American comedy duo whose career spanned five decades. Composed of comedians Bob Elliott (1923–2016[1]) and Ray Goulding (1922–1990), the duo’s format was typically to satirize the medium in which they were performing, such as conducting radio or television interviews, with off-the-wall dialogue presented in a generally deadpan style as though it was a serious broadcast.

The duo did more television in the latter part of their career, beginning with key roles of Bud Williams, Jr. (Elliott) and Walter Gesunheit (Goulding) in Kurt Vonnegut‘s Hugo-nominated Between Time and Timbuktu: A Space Fantasy (1972), adapted from several Vonnegut novels and stories. (Vonnegut had once submitted comedy material to Bob and Ray.) Fred Barzyk directed this WGBH/PBS production, a science-fiction comedy about an astronaut-poet’s journey through the Chrono-Synclastic Infundibulum. This teleplay was first published in an edition that featured numerous screenshots of Bob and Ray and other cast members.

(I will eventually write about the double channel show that was also broadcast by WGBH Channels 2 and 44. I wrote and directed the Bob and Ray segment called “The Yin and Yang of It.” I also directed the first HBO Entertainment Special which was the Bob and Ray’s Broadway Show: “The Two and Only,” 1970. It was a co- production between WGBH & HBO and shot in Studio A with an audience. More on that later.)

Now, back to Between Time and Timbuktu. 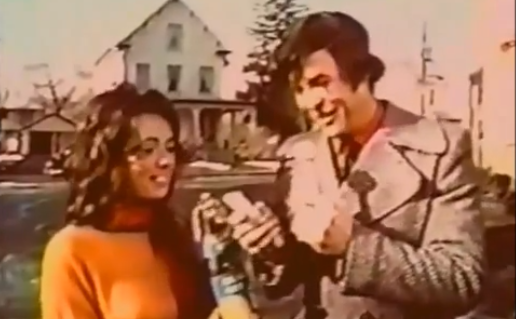 The writer, David O’Dell, laid out a first draft of the script and that was passed on to Vonnegut for revisions. Kurt added a terrific opening scene in which an announcer (“Juicy Brucie” the number one DJ on NYC radio at the time) surprised Stony and his Mother at their home declaring him the winner of the Tang Grand Prize of a trip into outer Space.

David and I searched for locations in Boston: the ancient operating room in Mass General Hospital; a large freezer in a Waltham warehouse; a park outside Boston with pond and massive trees; exterior streets and buildings in the city.

We secured the studios of Catholic TV in Watertown and built a set housing Space Central control. It had a window overlooking the set for the TV hosts, Bob and Ray.

I gathered all my local non-union actors for the massive crowds needed. The Old Man from the original “The Pit” drama, (Ashley Westcott) now appeared in the operating room, completing the loop. Studio A at WGBH served as the stage for the handicapped Ballet. It was truly a grab-bag experience. But it was a crazy lot of fun.

This was the most organized directing job I ever had done. 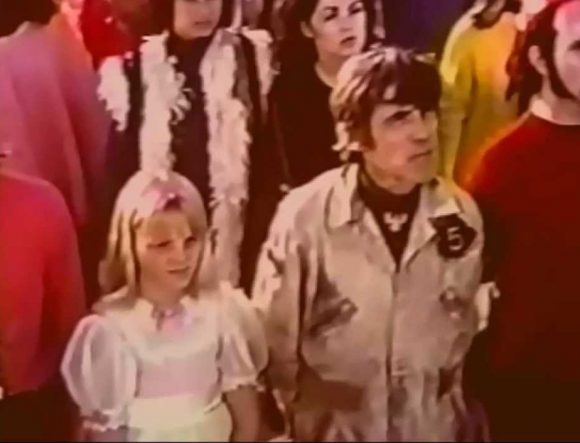 We were on a tight budget with no room for mistakes. There was one scene in which Stony was to be enclosed in a padded cell. Since he was whipped back and forth from Space to Earth and talked about it, he was considered insane. It was a Saturday and Hickey was to have taken the train to Boston for the shoot. He was “under the weather.” His Mom had to accompany him. I shot the damn scene in every possible direction but it never really worked. We had to abandon the scene. 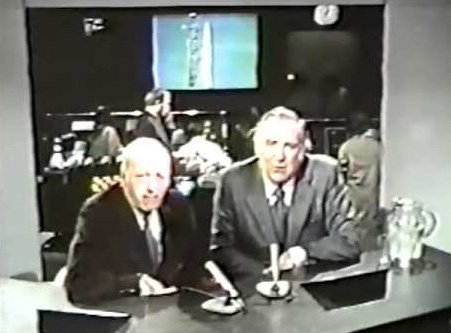 Bob and Ray did a one-day shoot at Control Center. They followed the O’Dell script with add-ons from Kurt. At the lunch break, I felt that some of the bits weren’t giving them a chance to free form and improvise. I sat over my sandwich trying to come up with an idea that would give them some leeway. And then it hit: “One Small Step for Man, One Giant Leap for Mankind” The gimmick? They can’t remember the exact wording. They just went on and on, getting more outrageous and silly. I was watching Kurt who was standing just outside the set. He was laughing his guts out (his words). Bob and Ray said they received more phone calls from friends about how terrific they were in this movie. That was really nice.

And then the big day came. David had secured permission to shoot in the abandoned World Fair Grounds outside New York City. It had a major open arena and a large globe of Earth standing in the ruins of a once grand concourse. David arranged for schools to bus in hundreds of kids, a large marching band, and a fire truck to bring Stony to our vision of heaven. (Kurt always said it was out version, not necessarily his.)

In this scene Stony stands up to his worst nightmare, Hitler. The O’Dell scene was quite short and not really developed. Then, just as we arrived at the location that morning, Kurt shows up with a whole new scene: a fight scene between Hitler and Stony. It was spectacular. He had stayed up all night writing it and we scrambled to make it happen. We were in awe of Kurt’s generosity allowing us to create something so important.

His new conceit for the scene? Stony could overcome the worst nightmare of his life, Hitler and his reign of death, by using his “imagination.”

It was imagination over Death.

The fight between Hitler and Stony was an imaginary battle that Kurt felt deeply. Each tries to make the other disappear, causing pain and anguish. Our meager Special Effects never reached the intensity that Kurt had written, but we tried. And then: Stony, battered and spent, wins. Hitler disappears. And then, Kurt in a moment of filmic inspiration, he has Stony use his “imagination” to make the marching band appear and disappear.

(In my estimation, this is one of the clearest explanation of what drove Kurt’s imagination. His experience in the war had left him devastated. His novel “Slaughter House Five” was one way to expel the demons. This was another chance to clear the air.)

And so it goes, as Vonnegut has said many a time.