This facilities request was found in a 2” videotape box as this program, featuring the renowned architect/inventor Buckminster Fuller, was being dubbed in 2010 to a modern tape format. 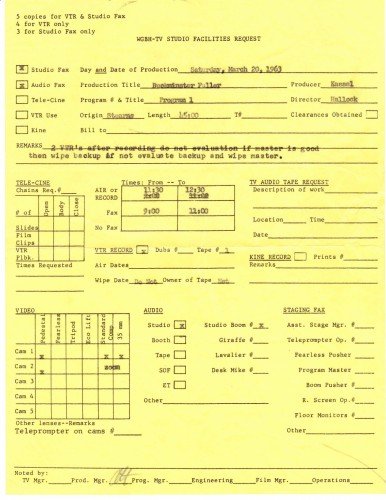 It is rare to come across such a document. It denotes that the show was taped 47 years ago at Stearns Hall at the Museum of Science. This was one of the temporary homes to WGBH television productions after the 1961 fire and during the time the Allston facility was being built.

It appears that 2 VTRs were utilized: one as a master, the other a backup. It is likely they did this for 2 reasons. One is machine failure, the other is tape failure.

Notice this: “After recording, do NET evaluation. If master is good, then wipe the backup. If not, evaluate backup….” The tapes would be technically evaluated before delivery to the National Educational Television Network, for video dropouts and other servo/mechanical discrepancies, specific to the state of the art video recording equipment of that time. One or the other of the tapes were erased for later use.

This document provides a glimpse into production life at an extraordinary time in WGBH history.