Excerpts by Alex Prud’homme via The Boston Globe

Though she did not own a TV set, Julia had been bitten by the television bug from the moment she set foot on a studio set. She and her coauthor and best friend, Simone “Simca” Beck, had appeared on NBC’s Today show to promote Mastering [the Art of French Cooking], and afterward Julia wrote: “TV was certainly an impressive new medium.” (She would soon buy her first television with the proceeds from book sales.) By then, she had been teaching cooking for nine years and was on a mission to spread the gospel of “le gout francais” — the very essence of French taste — which she fervently believed could be reproduced by American cooks in their home kitchens. All that was needed, Julia said, were a set of clear instructions, the right tools and ingredients, and a little encouragement.. 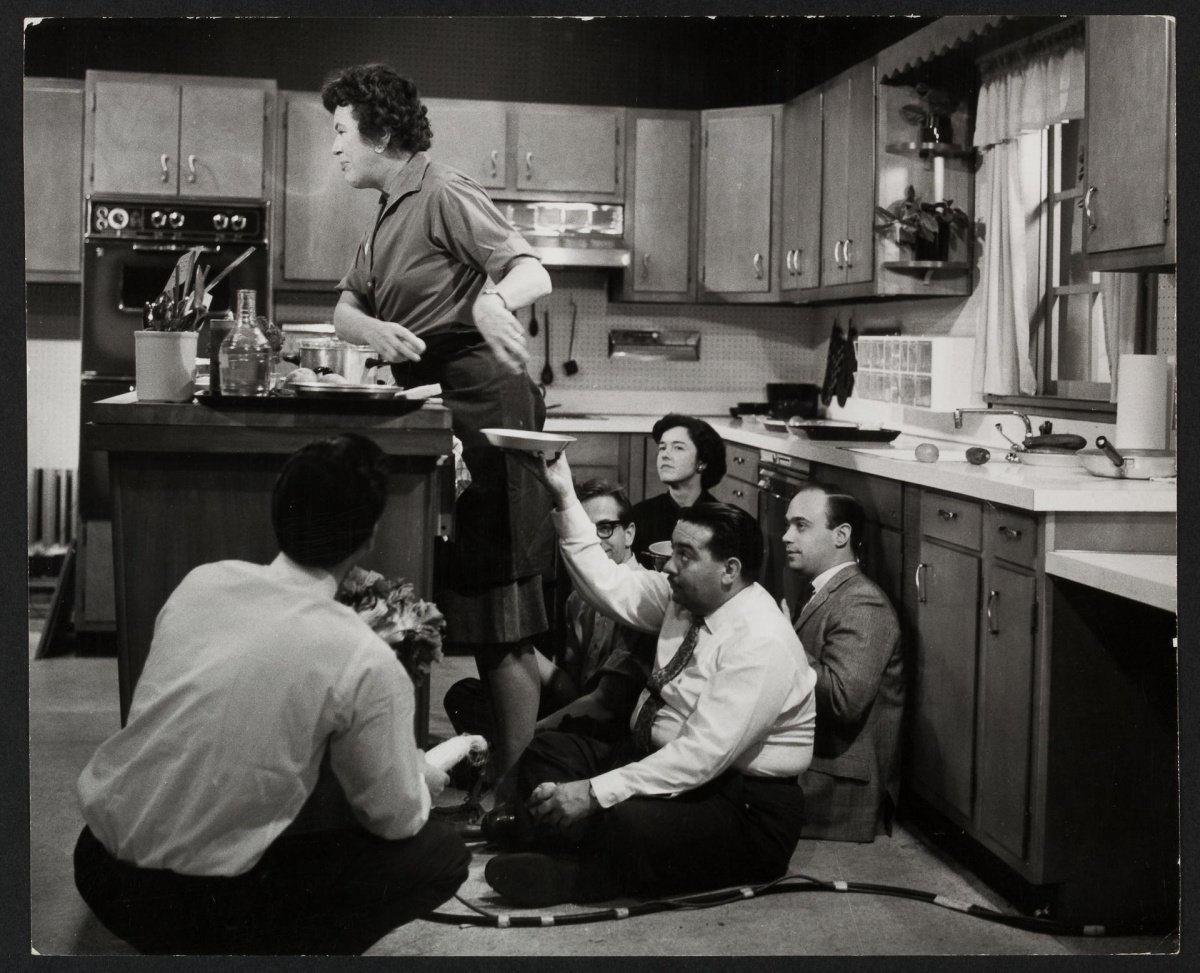 In April 1962, shortly after appearing on I’ve Been Reading, Julia typed a memo to WGBH in which she laid out a vision for “an interesting, adult series of half-hour TV programs on French cooking addressed to an intelligent, reasonably sophisticated audience which likes good food and cooking.”

Each program, Julia suggested, should focus on just a few recipes, and her cooking demonstration — “informal, easy, conversational, yet timed to the minute” — should lead to a discussion of broader culinary matters, such as “a significant book on cooking or wine, an interesting piece of equipment, or a special product.” Julia suggested that other experts, such as a pastry chef or a sommelier, appear as guests, and that well-known chefs — such as James Beard or Joseph Donon (a master French cuisinier) — cook side by side with her on the show.

WGBH had never produced a cooking program, had a small audience, was largely run by volunteers, and operated on a shoestring budget. But encouraged by the public’s strong response to Julia on I’ve Been Reading, the station arranged for her to shoot three trial episodes of a televised cookery show.

On June 18, 1962, the Childs arrived at a borrowed “studio” in downtown Boston — actually, the demonstration kitchen of the Boston Gas Co. — to shoot the initial pilot episode, “The French Omelette.” (Julia preferred the French spelling of that word.) Julia brought her own frying pan, spatula, butter, and eggs. The lights flicked on, and the show’s producer, 28-year-old Russell “Russ” Morash, directed two stationary cameras. Because videotape was so dear, the show was essentially shot “live” in one continuous half-hour take. “I careened around the stove for the allotted twenty-eight minutes, flashing whisks and bowls and pans, and panting a bit under the hot lights,” she recalled. “The omelette came out just fine. And with that, WGBH-TV had lurched into educational television’s first cooking program.”

The second and third pilot episodes, “Coq au Vin” and “Souffles,” were both shot on June 25. This time, Julia had rehearsed the shows at home. Paul built a replica of the set in their kitchen, labeled utensils, made sure the ingredients were measured beforehand, and coached Julia with a stopwatch. Though she continued to gasp and misplace things, she grew more self-assured with each performance.

Julia’s special sauce — her ability to blend deep knowledge, broad experience, precise technique, self-deprecating humor, and infectious enthusiasm — won the public’s heart. There was simply no one quite like her on TV. Julia loved this “high-wire act,” but admitted that she was “a complete amateur” and had no idea how she came across on TV. The answer was simple: The camera, and the audience, loved her.

In response to the “Coq au Vin” show, a viewer named Irene McHogue wrote: “Not only did I get a wonderfully refreshing new approach to the preparation and cooking of said poultry, but really and truly one of the most surprisingly entertaining half hours I have ever spent before the TV in many a moon. I love the way she projected over the camera directly to me the watcher. Loved watching her catch the frying pan as it almost went off the counter; loved her looking for the cover of the casserole.”

Encouraged, WGBH signed Julia up for a 26-episode series. Ruth Lockwood, the assistant producer, scrounged up a track of bouncy French theme music. Unable to decide on a name for the program, Julia called it The French Chef — though she was neither French nor a professional chef (she called herself “a cook”) — until she could invent a better title.

In the first episode, a slightly nervous, fresh-faced Julia demonstrated how to make boeuf bourguignon, the venerable beef stew that would run as a leitmotif through her career. At the end of the show, she tucked a dish towel into her apron, and spontaneously said: “This is Julia Child. Bon appetit!”

When The French Chef hit the Boston airwaves in 1963, WGBH shared copies of the tapes with sister stations, allowing viewers in New Hampshire, Maine, Pennsylvania, and parts of New York to watch Julia a week after she aired in Boston. It would start being distributed nationally the next year.

The audience responded viscerally. You are a delight! wrote housewives, hippies, taxi drivers, MIT scientists, and Wall Streeters. The French Chef was “educational TV’s answer to underground movie and pop/op cults,” Joan Barthel wrote in The New York Times Magazine. “The program can be campier than ‘Batman,’ farther-out than ‘Lost in Space,’ and more penetrating than ‘Meet the Press’ as it probes the question: Can a Society be Great if its bread tastes like Kleenex?”

A big part of Julia’s allure was her natural ease on TV. Her combination of grace and awkwardness built a sense of trust and intimacy with the audience, which was reinforced by her deep knowledge and sure technique. She used humor to keep her viewers engaged, but because she was so technically adept, she (usually) managed to triumph over adversity.

She would start making a quiche, misplace her glasses or lose her train of thought, find them again, and carry on. She would rapidly and expertly dice a pile of mushrooms, fillet a trout, and demonstrate how to encase poached eggs in a delicate consomme gelatin (oeufs en gelee). But in the next instant, a spoon would go flying off-screen, an Apple Charlotte would collapse and she’d mash it back together with her fingers (“It will taste even better this way”), or she’d incinerate the croutons atop a French onion soup into charcoal briquettes (“That’s beautiful! There you are. I think that possibly that browned a little bit too much. But I don’t know. It gives a very good effect.”)

Confronted by a mishap, Julia would look momentarily befuddled and cuss under her breath or just tilt her head back and laugh….

Julia liked to point the TV camera straight down into a pot of softly bubbling boeuf bourguignon to show what it should look like as it cooked. It was instructive, but it also activated your taste buds and tempted you to dive right through the screen to dig into a heaping bowl of that succulent comfort food. “To do that is not easy,” observed the chef Jacques Pepin. “She had a very rare quality.”…

Though she disliked “tooting my own horn,” Julia had a messianic zeal for spreading culinary knowledge. In championing the pleasure of shopping, cooking, eating, and even of cleaning the dishes, she became a role model for people of all genders, races, ages, and creeds. For her, kitchen work was not “domestic drudgery,” it was “such fun!” With the battle cry “Bon appetit!” she reinvented what it meant to be a television chef and brought a growing audience of American home cooks along for the ride.