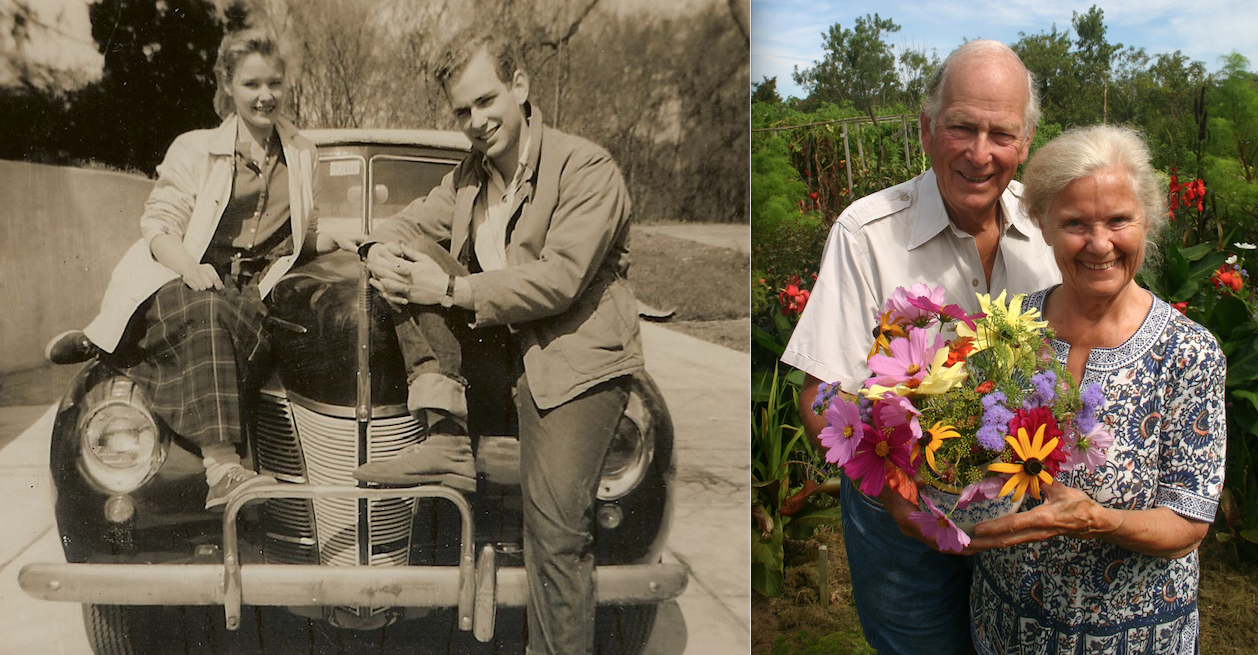 By Madeleine Cohen, via Oldways

I’ve always known that my grandparents were cool.

It ﬁrst hit me when they told me of their close friendship with Julia Child, who I had learned at a young age was a major player in the culinary world. As I got older, though, I discovered that Julia Child’s friendship was relatively low on their long list of collective accomplishments.

I learned that my grandfather, Russell Morash, introduced “Do-It-Yourself” television to the world—as the producer and director of This Old House and The Victory Garden—and that my grandmother, Marian Morash, was known on TV as “Chef Marian” and was the founding chef of a notable restaurant at a time when kitchens were predominantly male-run.

While I’ve known for a while about my grandparents’ many achievements, it wasn’t until this summer when I interviewed them for this blog that I realized just how extraordinary their stories are. So, in only a few paragraphs, I will do my best to sum up the highlights and explain how they came to be the trailblazers they are today.

The Founding Father of How-To Television

The year was 1955. In Boston University’s theater department, a sophomore girl studying scenic design caught a glimpse from across the studio of a sophomore boy studying to become a theater director. 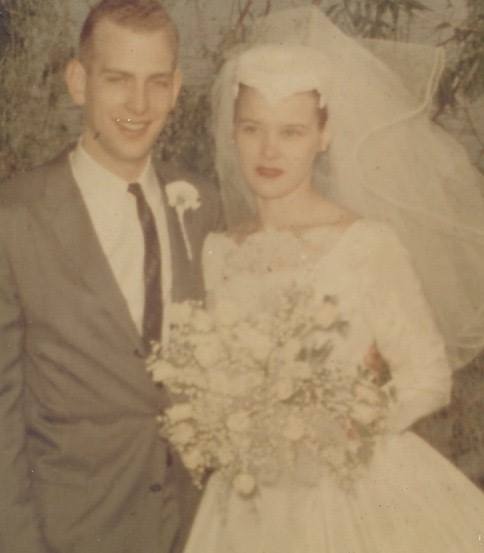 “I saw this really quite good looking fellow and I thought, Hmm, I wonder who he is,” Marian recalls today. “I made sure I got introduced, and well, that was that.”

The two both graduated in 1957, and upon graduation Russell was faced with a big decision. Should he accept a job oﬀer of assistant stage manager for a Samuel Beckett play in New York, a ﬁrst step toward fulﬁlling his Broadway director dreams? Or should he accept a position as a production assistant/cameraman for WGBH TV, a Boston-based Public station that sought out Russell for his theater experience?

In those days, the TV industry included cameras the size of refrigerators and on-screen talent with no experience performing. Russell was a catch—his background in theater made him desirable for this new ﬁeld.

He chose WGBH, likely due in part to the fact that if he stayed in Boston he could continue his love aﬀair with Marian (which became a marriage in 1958), but also because he believed he could work his way up in the budding television industry and ultimately make a diﬀerence. 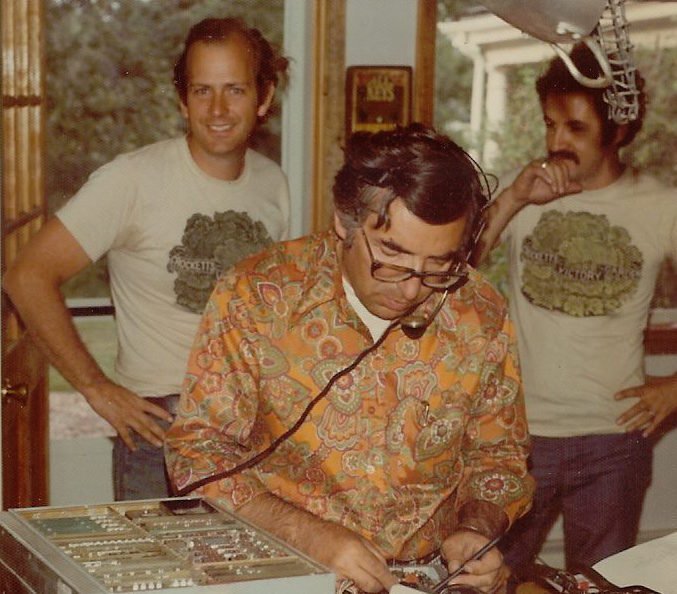 Russell Morash (far left) shooting an episode of “The Victory Garden” in 1977.

Russell went on to produce and direct a number of television programs for WGBH, beginning his career with science programs and children’s shows like Science Reporter and Ruth Ann’s Camp and going on to specialize in DIY programming including shows such as The French Chef with Julia Child, The Victory Garden, This Old House, and The New Yankee Workshop, among others.

Often called “the founding father of how-to television,” Russell believed that the world could beneﬁt from instructional programs teaching people how to improve their lives, from growing and cooking vegetables to building and ﬁxing furniture in their homes.

The public was incredibly receptive to these programs at the time, and his shows kick started an entire industry, one that prevails today with the hundreds of cooking shows and home improvement shows still on TV.

Russell (right) directing an episode of “This Old House.” 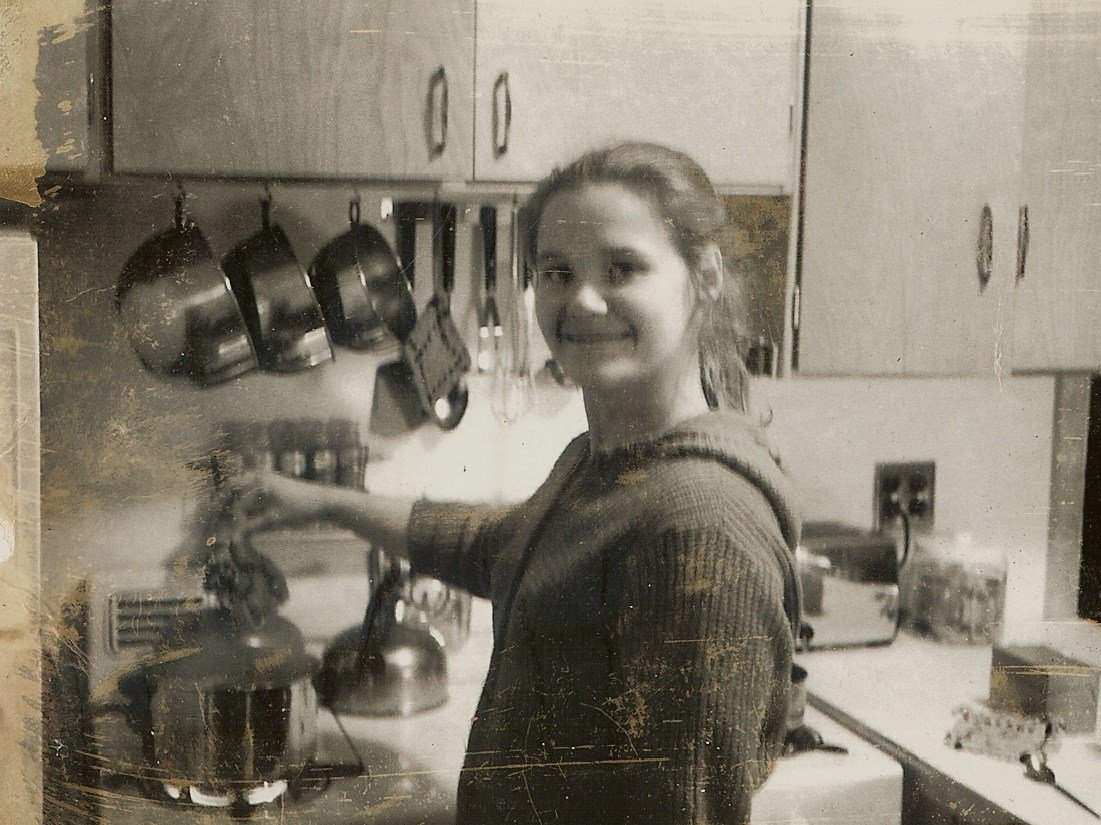 Marian experimenting with a recipe from Julia Child in 1963.

My grandmother wasn’t always comfortable in the kitchen. It was only when Russell began working on The French Chef with Julia Child in 1963 that Marian ﬁrst started cooking. Russell would bring home leftover food from the show and instructions from Julia on how to prepare and cook it. Suddenly, Marian went from cooking her usual tuna ﬁsh casserole to preparing things like whole goose stuﬀed with prunes that were stuﬀed with foie gras.

Inspired by Julia’s entertaining personality and love of food, Marian and her friends began watching the show and experimenting at home. This marked the beginning of her successful cooking career as a television cook, cookbook author, and restaurant chef.

In 1975 Russell asked Marian to cook vegetables as “Chef Marian” on his show, The Victory Garden. Up until this point, the show taught people how to garden and grow their own vegetables, but with Marian’s added cooking segment, viewers could now learn how to prepare and cook what they grew. Her segment became a hit, and the show inspired Marian to write The Victory Garden cookbook series, the ﬁrst of which was published in 1982. 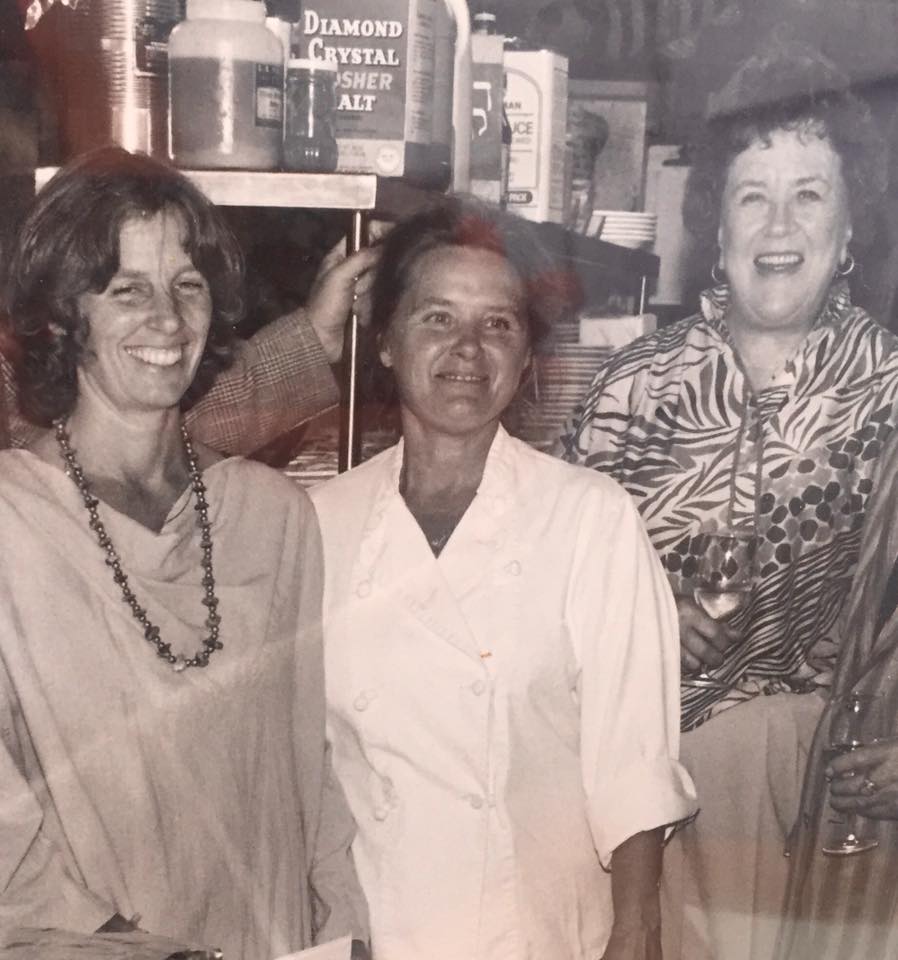 The same year that Marian began cooking on The Victory Garden, she and her friend Susan Mayer were approached by Jock and Laine Giﬀord, friends of theirs who wanted to start a restaurant on the island of Nantucket. The restaurant would not be a professional kitchen, but rather a place that would serve the simple and delicious food Marian and Susan prepared at dinner parties, which Jock and Laine often attended.

Marian agreed to give it a try, and the restaurant opened in 1976. Through trial and error, and by reading the cookbooks of Julia Child and Joe Hyde, Marian taught herself what she needed to know to be a chef and run a restaurant. She went on to run Straight Wharf Restaurant for 11 years and received the James Beard Who’s Who of Food and Beverage in America Award in 1984.

For a period of time, Straight Wharf had an all-women kitchen, aside from a young man who shucked oysters. This was unusual for a restaurant in those days, a time when many male chefs believed that women didn’t have a place in the kitchen, that women weren’t cool in the kitchen. Chef Marian deﬁed the norm and proved just how successful a woman head chef could be.

I’ve always admired the ways in which my grandparents were able to pave their own paths, so I sat down with them one-on-one and asked them a little bit more about what it takes to be a pioneer. Even though I interviewed them individually, I was struck by how similar their answers were. 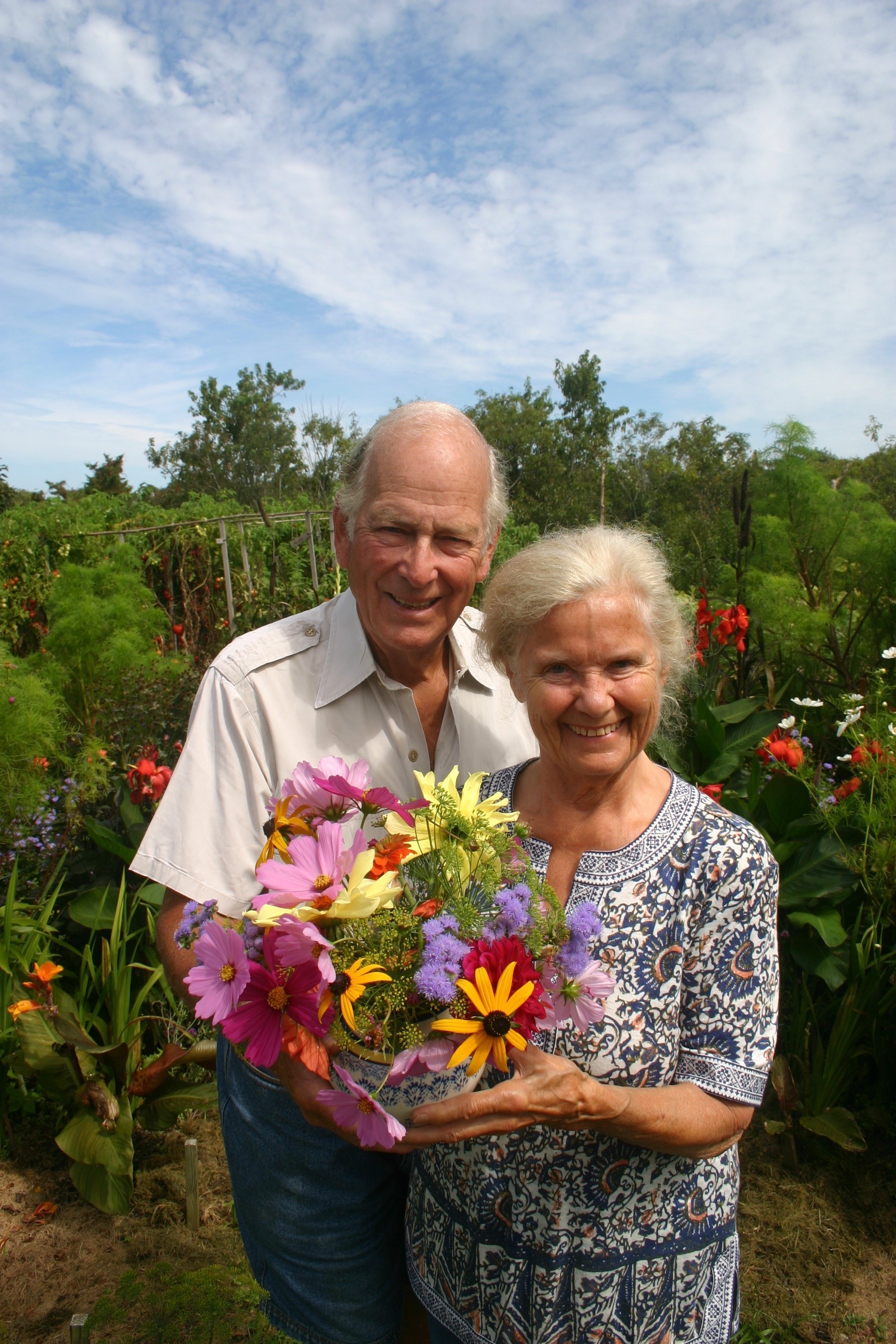 Russell and Marian in Russell’s garden in Nantucket, MA.

OW: What qualities does a “trailblazer” need to have?

Marian Morash: Curiosity is a big thing. You don’t get anywhere if you’re not curious and want to learn. I would go back to Julia on this one.

I remember once that she had a Cuisinart. The ﬁrst food processor in the U.S. was the Cuisinart, and then gradually other companies began to make food processors. She had to get every single one of them because she was curious. Does this one work better than this one, can I make more with this one than that one?

Russell Morash: Curiosity. One of the great things about Julia Child was that she was a curious person. She would ask you what your job was before she’d tell you anything about herself because she was truly interested in it and how you worked and what you needed.

OW: What’s one quality that your partner has that you wish you had more of?

MM: Conﬁdence. He’s very conﬁdent. He’s very sure of what he’s doing. He doesn’t think about it and say oh maybe I should do this or do that.

RM: I wish I could cook. But she’s so good at it there’s just no point.

Reposted with permission of Oldways.